It is very busy with online orders. Unfortunately, our distribution partners cannot deliver everything on time. Some packages have been delayed. 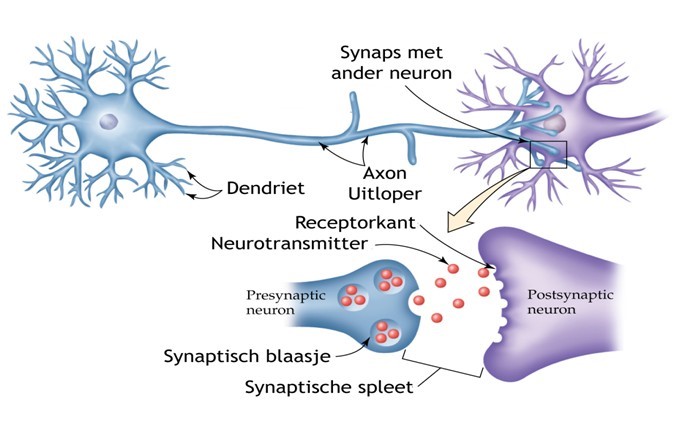 Where two neurons meet, a very small gap (synapse) exists between them. The electrical impulse traveling along the axon of the neuron must convert into a chemical signal to bridge this gap. The chemicals that do this are called neurotransmitters. These so-called chemical messengers are involved in our different responses to situations.

What are the main Neurotransmitters?

There are more than 40 neurotransmitters in the human nervous system; some of the most important are:

Released by the adrenal glands that sit on top of each kidney. Adrenaline increases the flow of blood to our muscles, raises our heart and dilates our pupils. It is crucial in our flight-or-fight survival response.

Similar to adrenaline, the release of this chemical can result in increased levels of alertness, helping to prime us for action if needed. It also increases our blood pressure and widens our air passages.

This is the addictive reward chemical that your brain craves. It serves to motivate you to seek out the things you need for your survival. We can sometimes find ourselves enslaved by this ancient reward mechanism.

Also known as the ‘cuddle hormone’, oxytocin is released when you are close to another person. It’s essential for making strong social bonds, and it’s also a key part of why we want to trust people.

Responsible for regulating muscle tone, Gamma-Aminobutyric acid (GABA) also regulates the communication between brain cells. It can calm us down by reducing the rate at which our neurons fire.

The most abundant neurotransmitter in the vertebrate nervous system, glutamate is used by nerve cells to transmit signals to other cells. Too much of it can cause cognitive impairments.

Triggered by the sensation of pain, endorphins work to inhibit the transmission of pain signals. Capable of producing a sense of euphoria, studies have suggested endorphins may also be stimulated by laughter.

Serotonin is linked to our wellbeing and happiness, and our levels of it are affected by exercise and exposure to sunlight. It also helps regulate our mood balance, sleep cycle and digestion.

This website uses cookies to improve your experience while you navigate through the website. Out of these, the cookies that are categorized as necessary are stored on your browser as they are essential for the working of basic functionalities of the website. We also use third-party cookies that help us analyze and understand how you use this website. These cookies will be stored in your browser only with your consent. You also have the option to opt-out of these cookies. But opting out of some of these cookies may affect your browsing experience.
Necessary Always Enabled

Any cookies that may not be particularly necessary for the website to function and is used specifically to collect user personal data via analytics, ads, other embedded contents are termed as non-necessary cookies. It is mandatory to procure user consent prior to running these cookies on your website.