We are seeing less and less delays in postal services, but they still occur.

What is a Certificate of Analysis?

The content of a Certificate of Analysis varies by industry and product category. Below we discuss the content of a COA that is generally accepted for the raw materials processed in Next Valley products.

Why is a Certificate of Analysis needed?

Next Valley, like other food companies, must ensure that their products are safe and reliable. The rules for food safety and food quality are the same for all countries of the European Union (EU). These rules can be found in the General Food Regulation (ALV) or General Food Law. On behalf of the government, the Dutch Food and Consumer Product Safety Authority (NVWA) supervises, among other things, safe food production and sale. The NVWA does this for producers, traders and the catering industry. Companies are themselves responsible for the production of safe and reliable foodstuffs. Companies that handle food must do so in a safe and hygienic manner. With a food safety plan, a company maps out what can go wrong and how mistakes can be prevented.

Part of the Next Valley food safety plan is checking the supplied raw materials. It is checked whether the delivered substance is the raw material that has been ordered and that it is not contaminated with other substances.

What is supplied by the raw material supplier?

The first step is the verification of the Certificate of Analysis provided by the suppliers. Below is a portion of a COA supplied to Next Valley with a batch of Magnesium Citrate Anhydrous. 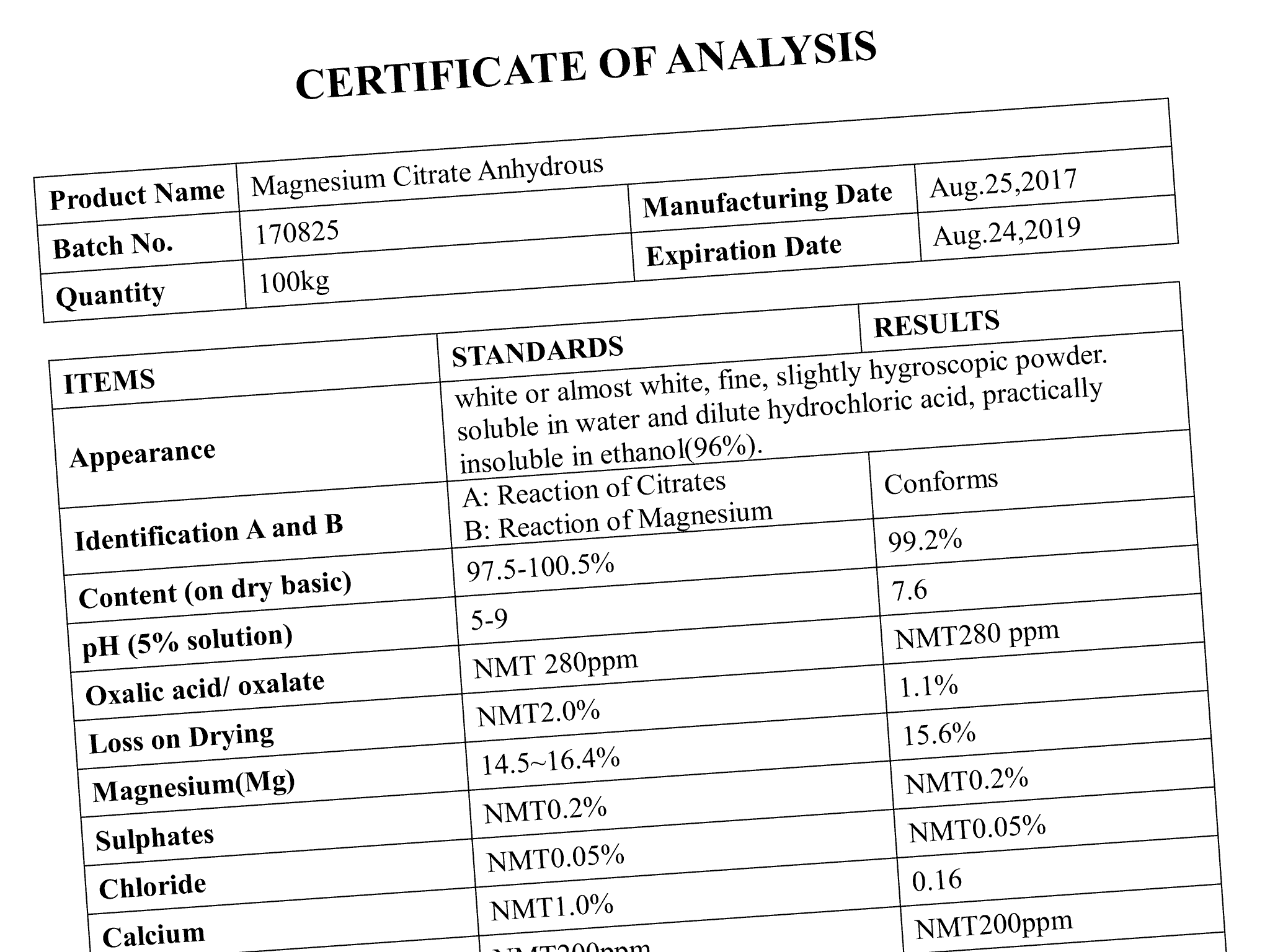 In these suppliers’ Certificate of Analysis, the ordered quantity is stated in addition to the name of the raw material. In addition, you will find out which batch this delivery comes from, when it was produced and until when this batch can be stored.

A description is made about the raw material, what it looks like, structure and how the substance behaves in other solutions. Then different items/tests are split into 2 columns. The first column shows how a specific test should fall within a standard and in the 2e column the actual value of the test.

Ultimately, this COA is signed by the lab technician who performed the test. This is often a laboratory technician from the supplier itself.

What is the role of the independent laboratory Nutrilab?

In Next Valley’s food safety plan, a Certificate of Analysis provided by the supplier is marked as Hazard (high risk) and must be regarded as a Critical Control Point. This critical control point, as described in HACCP, can be a risk because Next Valley has not supervised the execution of the analysis. For suppliers within the European Union (EU), these suppliers must comply with the same laws and regulations of the General Food Regulation (ALV) or General Food Law. For suppliers outside the European Union, legislation and regulations with regard to food safety and food quality may be different.

For analyzes prepared by suppliers outside the European Union, Next Valley has a Certificate of Analysis drawn up for each batch received by an independent European recognized laboratory, Nutrilab. For example, Next Valley supervises the analyzes and they are carried out in accordance with the legislation and regulations of the General Food Regulation (ALV) or General Food Law of the European Union.

Nutrilab’s laboratory, located in the Netherlands, analyzes the raw materials for contamination and for food fraud (is the supplied raw material really the substance that Next Valley expects it to be).

The image below is a portion of the analysis for Gamma Amino Butyric Acid (GABA) performed by Nutrilab. How does Next Valley prevent food fraud?

In addition to general information about the supplied raw material, you can find the outcome under the heading ‘Near Infra Red’ that determines whether the substance is actually the substance that we offer for analysis.The Near Infrared Spectroscopy or NIR is a method of testing in which a spectrum of the substance is determined. Each substance has a unique spectrum and is like a fingerprint with which it can be determined whether the tested substance corresponds to a substance in the NIR database of Nutrilab (or of their partners). Specially for the substances that are processed in Next Valley products, Next Valley has set up an NIR database together with Nutrilab. This allows the supplied raw materials to be tested with the information from this database.

In the example above you see that the batch is tested against the database spectrum ‘Y-Aminobutric Acid’ (item line 5702), the supplied substance matches the database (item line 5701 ‘compliant’). This allows us to determine with certainty that we actually received Gamma Amino Butyric Acid (GABA). On this point, the supplier has proven to be reliable.

How is the contamination of raw materials checked?

In Nutrilab’s COA, under ‘Metals and Minerals’, you will find the analysis for contamination of the raw material supplied.

Maximum permitted levels have been set in the European Union for mercury, cadmium, lead, arsenic and tin. These values ​​are defined in the European Regulation No. 1881/2006.

The following limits for heavy metals apply in dietary supplements:

Arsenic (Arsenic) is so toxic that no tolerable intake can be established. The load with arsenic should be as low as possible.

Although tin is not very toxic, a high dose can irritate the stomach. That is why a maximum level of tin has been set in the EU for canned foods. Because the raw materials are not packed in cans, this analysis is not conducted.

In the example above, the results of the pollution analysis show values ​​that are 10 to 150 times lower than the allowed values.

What is a Certificate of Analysis not?

A COA is not an analysis of the functioning of the raw material. Health claims are not researched in a Certificate of Analysis.

According to laws and regulations, no claims can be made on the various effects as long as external studies into the raw materials are not recognized by the official authorities.